Well a little over a week ago we had 17 guinea fowl.

We went on vacation and came home to 9 guinea fowl.

Woke up the next day and found we had 5 guinea fowl?

Woke up this morning to 2 guinea fowl!

Mind you these birds are virtually wild and free to roam on several acres of land.

Clearly we are feeding the predator population a free meal!

So today the kids and I went on a “save the last two guinea” hunt.

After a lot of herding, chasing, and failed attempts to capture, we caught one!

Then a neighbor joined in the efforts.

More herding, chasing, failed attempts to capture, then we caught the other one.

So what do you do with two guinea fowl that have no clear coop or home to go to that is safe? Clearly you put them in the spare bathroom shower…right? Isn’t that what anyone would do? Haha!

After spending the day in the shower, they felt that was enough! I heard a horrific crash and went to see what took place in the bathroom…

…apparently they wanted a bit more space to roam! 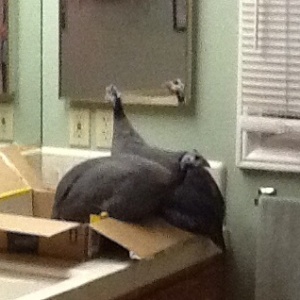 Which means I need to find a solution to these birds ASAP!

Now that the kids have named the last two survivors (Shizzle and MaNizzle) we obviously must make arrangements to have these two live in peace and happily ever after! (Fingers crossed, ideally they will get along with the chickens!)