My new goal is to show a better idea of how our weeks go for those new to homeschooling. I remember how difficult it was to wrap my head around the idea of homeschooling, because I never knew if I would be doing it right. Nearly five years later I can assure you, there is NO RIGHT WAY, in fact over the years we’ve mixed and mingled many styles and philosophies. The bottom line is: if your children are learning, your family is successfully homeschooling.

So this past week we had a few fun adventures outside of our typical academics.

The kids were enrolled in a Home schoolers Bike Safety Course. The organization that set it up, was fantastic. They had laid out an entire course of faux streets, stop signs, lanes, pedestrians, sidewalks, texting drivers, bushes where random things came darting out towards them, even had car doors that flung open as they tried to pass. I was particularly impressed when they had ten kids on bikes riding in a figures 8 sorting out the intersection issues on their own! Kids are really capable when given the power!

We also attended a homeschool PE class. (Always cracks me up when people think homeschool kids don’t socialize…still makes me giggle a bit when someone asks me if I am concerned about socialization.)

This weeks class was dodge ball, which was an all times favorite of mine! After the hour-long class, a majority of us stayed and the kids played for another hour or so. All ages, sizes and genders happily engaging and having fun together!

We learned about the Native Americans and the theories on what the paintings mean. I personally thought the picture the experts debate being a bird or a turtle I thought was more of a round circle with nothing more to it, could be a dinner plate, the sun or moon, etc..regardless it was interesting and fun to see.

We we spent some times at the tide pools. We found some pretty cool creatures, shells and rocks. best part was we had our very own archeologist guide with us to share her knowledge both at the cave/wall and the tide pools!

The weather was BIZARRE…at one point we were freezing and wearing giant ski coats, the next moment we were baking hot and seeking shade!

My son who at times likes to “be tough and manly” decided today was an ok day to let down the guard and spend some time wool felting a blanket and sewing a pillow for his favorite stuffed animal. Winters can be so cold and we wouldn’t want his stuffies to freeze!

And last but not least, “Fiesty” (the only hen in the eight eggs we hatched out a while ago) started laying eggs…you can see her “practice egg” below next to an average sized egg. Isn’t that the cutest little yoke you’ve ever seen?! ❤️

See ya next week…

(please excuse any autocorrection I’ve missed…autocorrect might be the death of me one day!) 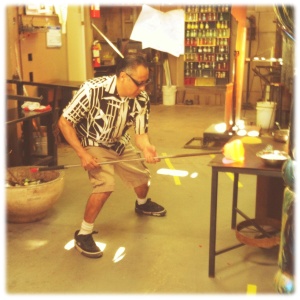 Recently we had a rare opportunity to watch a glass blower create amazing artwork. Saul (the glass blowing artist) and his wife Gina were both really kind gentle people who took the time to share this incredible craft with our kids.

He showed the kids all his supplies, how he makes the various colors, how to add colors to the clear glass, showing us all the tools and ovens used to make his creations. (Which are VERY HOT! 2000+ degrees hot!) He also crafted a gorgeous vase for the kid’s demonstration so they could see a ball of scalding hot goo turn into a masterpiece before their very eyes from start to finish. 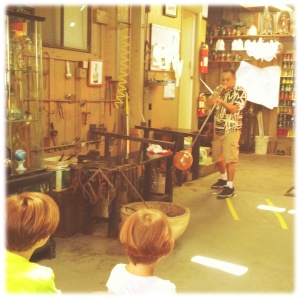 Saul is very humorous and entertaining for both the children and adults alike. His demonstration was so captivating, my wiggly giggly kiddos were frozen like statues watching, learning and sucking in every aspect of glass blowing like little sponges. They enjoyed every second of the experience and were in complete awe!

When he was finished with his demonstration, he took the time to let the kids create a piece of glass work themselves. He was very patient. Words can not describe how great he was with the kids. He is exactly what you would want in a mentor. My son was actually terrified at first of being burnt, but Saul was so good with my son; he was able to conquer his fears and create his bird. 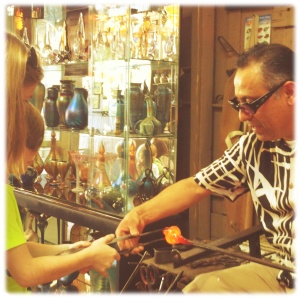 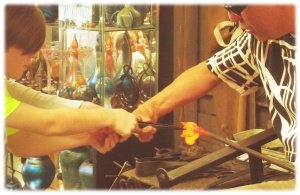 Both of my kiddos chose to make birds. They were able to pick their colors, manipulate the glass goo ball, use his tools and literally create their very own piece of art. 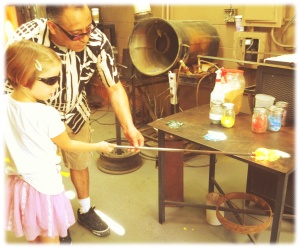 In this mother’s opinion, these two birds are priceless!

As a home schooler, I was thrilled to find out Saul and his wife Gina home schooled their children who are now in college.

If you have the opportunity to see glass blowing I highly recommend it.

I can’t take all the credit, a fellow homeschooling mama friend of mine gave me this great idea and my kids have had so much fun with it! We have created soooo many autumn decorations I’ve lost count! This is a fun adventure to help get the kids out into nature. (Even for those of you that might live in the cement jungle)

Afterwards my kids and I went outside and searched for various leaves. Amazing how many shapes are out there in plain view that are passed by daily and never noticed! We collected a TON. The kids had so much fun they continued to collect more and more well after we had plenty! All sorts of colors and shapes and sizes!

We only had a short time frame to create, so the kids got busy quickly!

Later in the evening after our busy day with friends, they went directly back to the table and started creating leaf creations again. We had leaf men, leaf fish, leaf birds, etc… 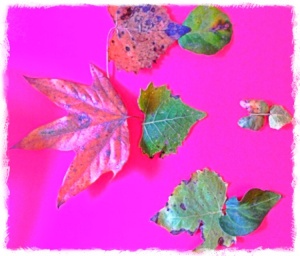 First thing this morning they are once again at the table creating more leaf creations. They are loving this project! I highly recommend this activity! (Even for adults! I have to admit I’ve had fun with it too!)

So get outside and start creating with nature! 🙂